Redness and Rosacea Treatment in Mississauga

Book a Consultation
As a board certified dermatologist, Dr. O’Neill has treated a lot of red faces. Redness and rosacea are common skin problems, more common in patients with fair skin and a history of easy blushing. Flushing or persistent redness is most common on the central face: cheeks, nose, chin and forehead. Women are affected 3 times more often than men.

Rosacea is a common skin condition that results in redness and visible blood vessels on the face. It may also lead to small, red pimples. Rosacea can affect anyone, however it is most common in fair skinned women. It usually starts in middle-age. It is sometimes referred to as the “Celtic curse”, as people of British, Scottish and Irish descent have a higher incidence of rosacea. Rosacea is often mistaken for acne.

Signs of rosacea include:

My rosacea patients usually report they have sensitive skin: skin care products frequently cause irritation. Rosacea can burn or sting. The skin may feel rough and scaly.

The cause of rosacea is unknown. It may be due to a combination of hereditary, immune and neurovascular factors. Rosacea is not caused by poor hygiene. There is no cure for rosacea. The goal of therapy is to control the signs and symptoms.

There are a number of triggers which can flare rosacea:

What we can do

Although it can’t be cured, rosacea can be controlled. Dr. O’Neill will first assess your skin, and confirm the diagnosis at her Mississauga clinic. 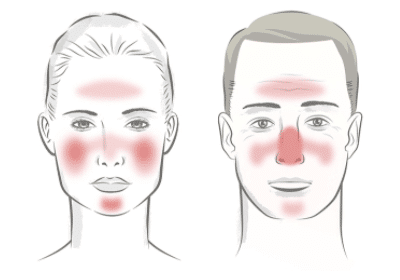 Providing you with an individualized comprehensive skin health program.

Meet Dr. O'Neill
It's about you!

Do you have questions? I have answers! Fill in the form and submit.
All information is kept confidential.